The Utilisation Shock to Assets and Facilities Caused by COVID-19

Rene Grozdanovski learns from Paul North from AssetFuture how COVID-19 has disrupted the utilisation of assets and buildings, and what that means for businesses.

For the fourth episode of #DigitalDialogues, I handed the reigns over to my colleague Sam Williams who talked to Mark Williams from TRIXi, Paul North from AssetFuture and Certus’ Maarten Van Der Zeyden about adapting workspace to the new environment.

When I watched the recording, one part that stood out to me is what Paul North calls the “utilisation shock to assets”. There has been much talk about how COIVD has changed the way we use spaces, but have you considered the massive changes in asset utilisation and the impact that has? During the episode, Paul explained, this is a significant concern for businesses with large asset and building portfolios.

As a response to COVID-19, many governments around the world ordered various levels of shutdowns and lockdowns. Many businesses were not allowed to operate for lengthy periods, and others were working at significantly reduced capacity.

Paul pointed out that some facilities went from 120% utilisation to less than 20% or even complete standstill. This unexpected disruption to the utilisation of assets and facilities significantly affects their long term degradation.

In addition, it has a major impact on maintenance regimes – to varying degrees in different sectors. For example, while schools where closed, some staff were considered essential, so the facilities were not completely shut down. Many of the essential workers were maintenance staff so that work carried on as usual.

The airline industry, on the other hand, was faced with the complete grounding of all passenger planes and only the absolute minimum of maintenance work was done. Skeleton crews kept planes checked over, but not in an operational capacity because they weren’t flying. That means the generally well-planned maintenance schedule for airplanes has been completely disrupted.

On a case by case basis, a changed utilisation level for an asset over only three months might not seem like a big deal. But, as Paul explains, things like cost over ten years, degradation and when assets will reach their end of life are all fundamentally going to change because of this massive shift in the utilisation of assets.

For organisations with 10s or even 100s of workspaces, assets and buildings, this change in utilisation will have a dramatic effect on how to best fund that portfolio. And each business will have to work out individually how to best manage that, based on utilisation levels during lockdown and how much maintenance work was done during this time.

Given all this, Paul expects that COVID-19 will change the way CFOs determine the need to maintain assets based on their utilisation and it’s likely to require a review of maintenance schedules and degradation timelines for the entire portfolio.

I thought that was a really interesting aspect of how COVID has changed the way we manage and maintain buildings and assets, and one that hasn’t been talked about much before.

If you want to learn more about adapting your workspaces to new uses in quick and smart ways, I recommend watching the entire episode of #DigitalDialogues. 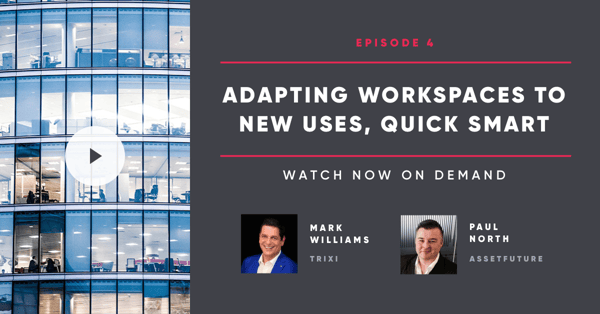 Stay up to date

Stay up-to-date with the latest news and receive notifications right to your inbox when new articles are published by subscribing now.